Today we’ll talk about some modifications to the game mechanics that not only add flavor to the role-playing, but also solve some issues that we encountered in the past.
The main thing pointed out by new players was that they didn’t know exactly where to go and what to do. After all, it’s an open world, and a free-to-go-anywhere board game. It takes a session or two before you find your favorite places to go, and things worth doing at the beginning. So we gave the player a purpose from day one. Previously we had a scenario system with one shared quest, but that didn’t work well.
Each character belongs to some faction that the player chooses at the beginning of the game. Each faction gives different benefits, but we’ll talk about these on another occasion. As a member of a faction, you have a duty to solve cases and investigate various problems that pop up.

Each player will start the game with a card that is the beginning of your story – your main quest. 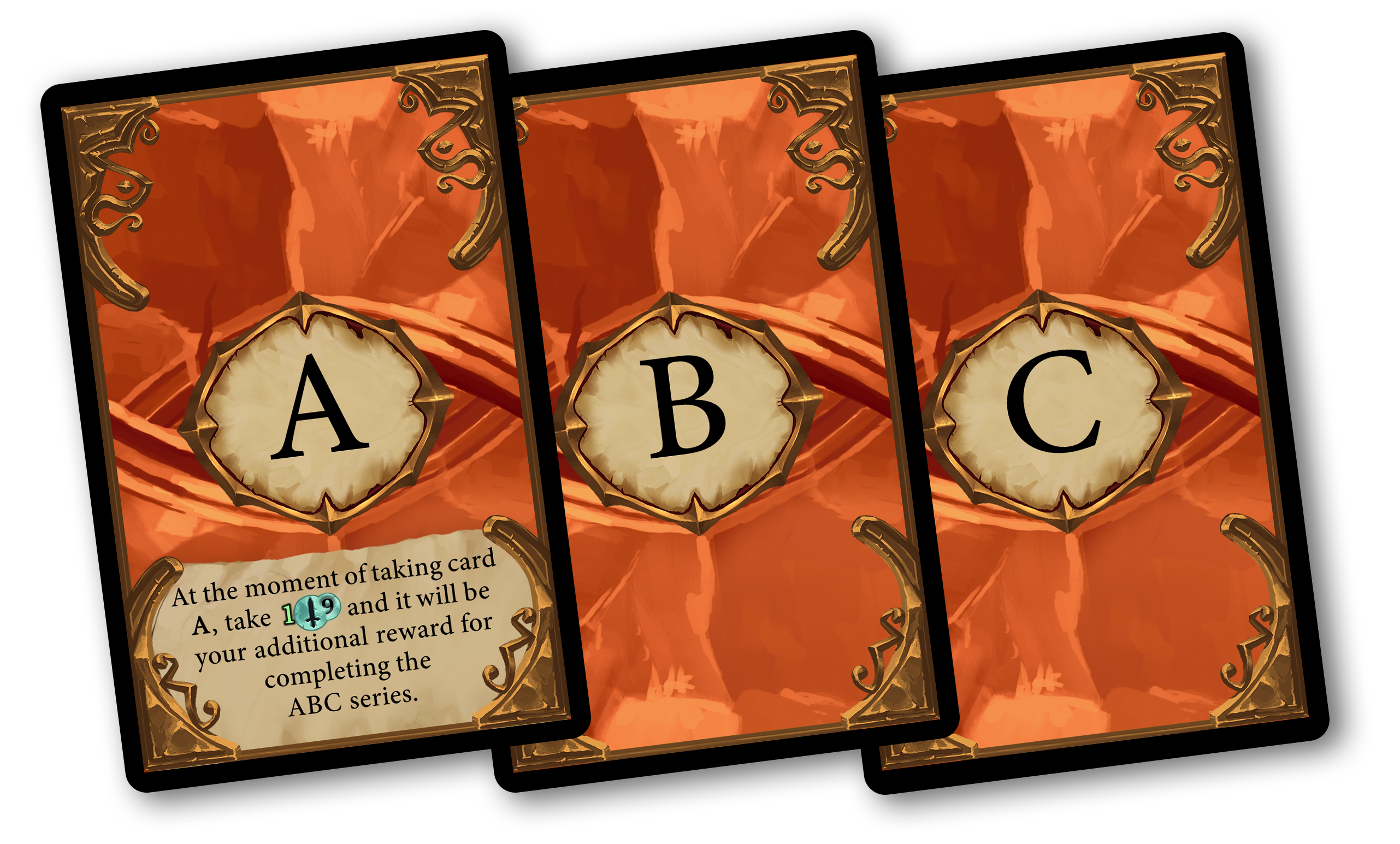 We’ve created a system with a temporary name “The ABC deck”. There are 3 stacks of cards A, B and C. A is the beginning of the story sequence. It describes what happened, and what you have to do next. Disclousure: The cards that we show you here are very first versions of the text without any proofreading yet. 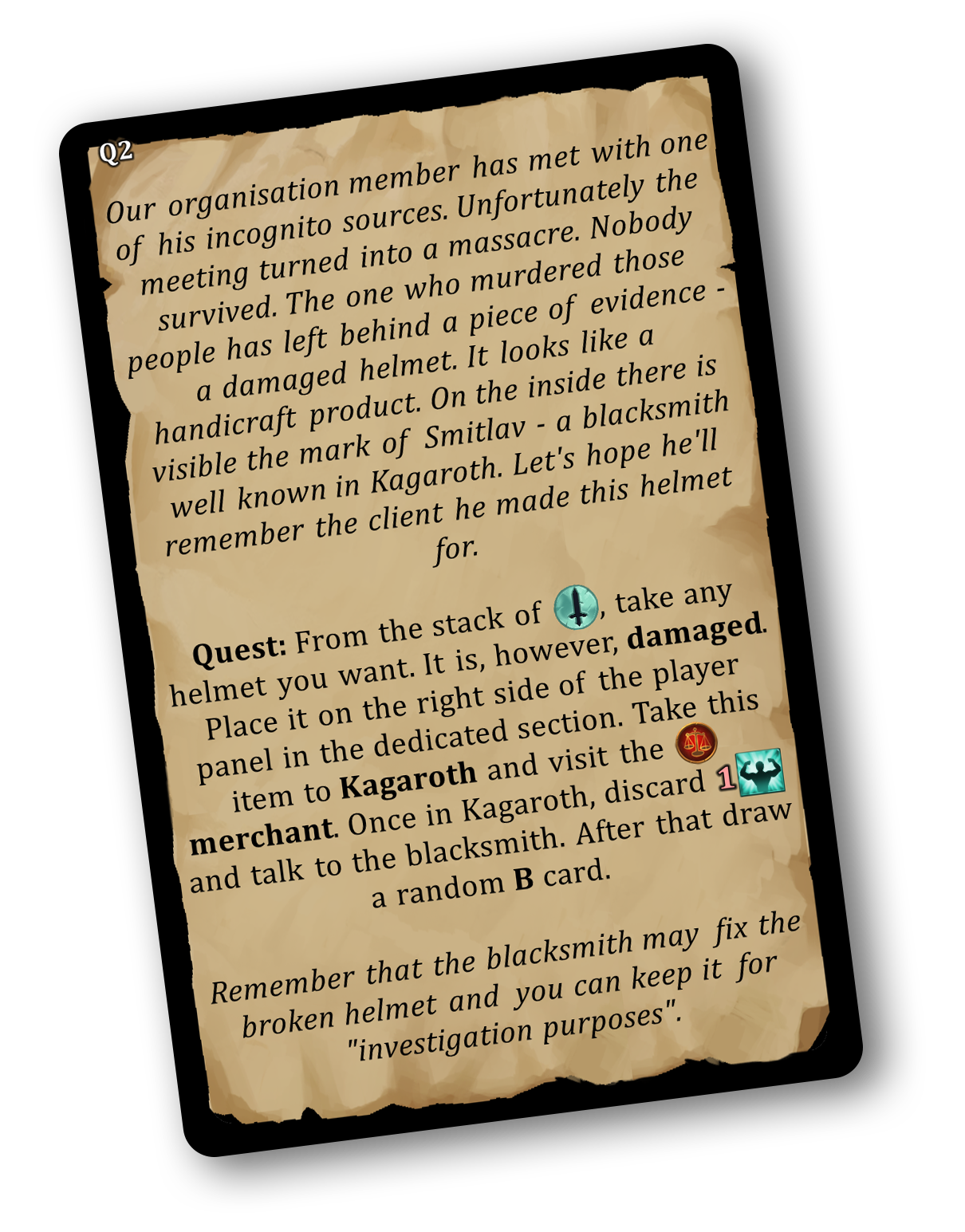 Once you’ve completed the task, you take a random B card. The story continues… 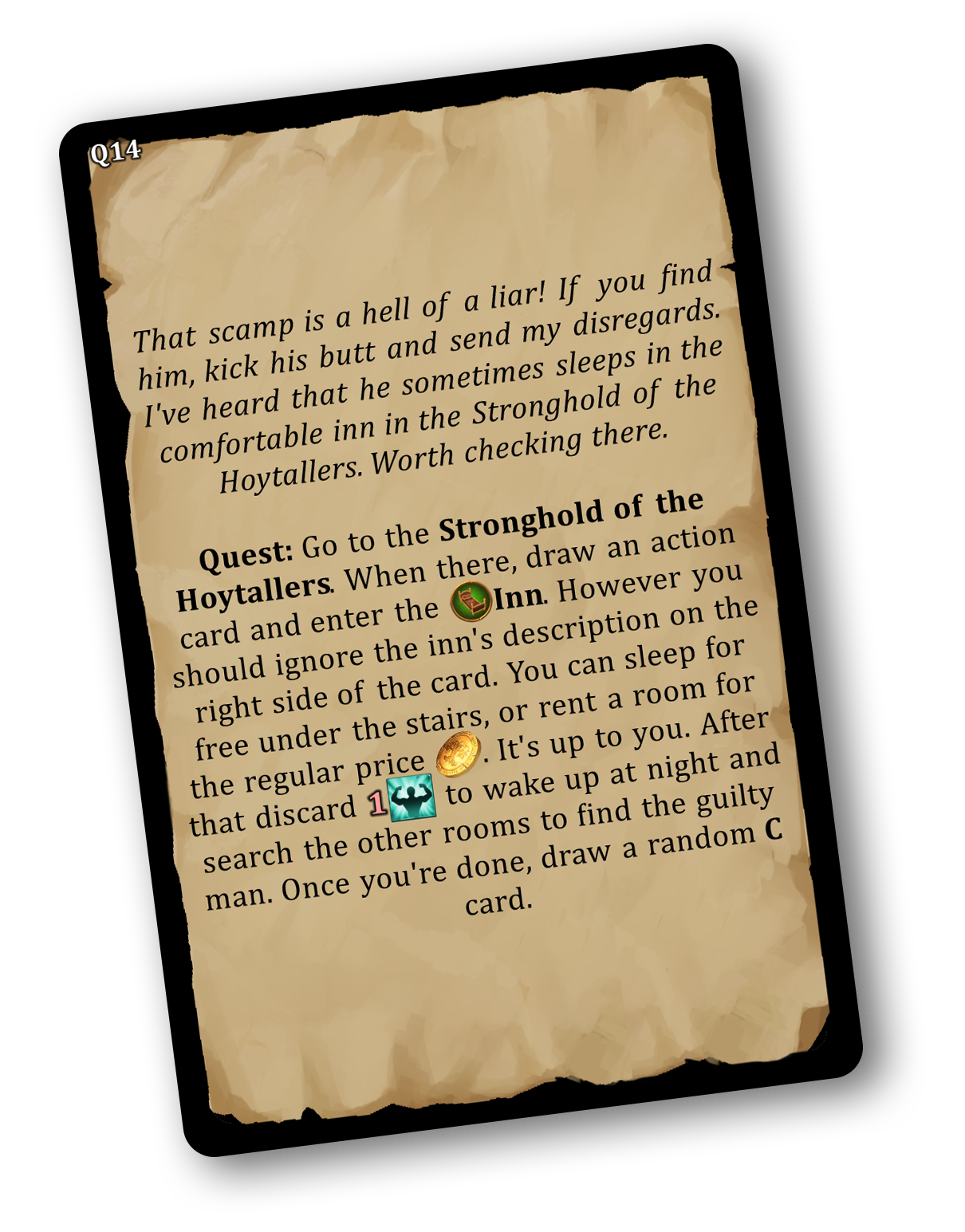 Finally, take the C card that is usually the confrontation, in which the player faces a very hard choice to be made. 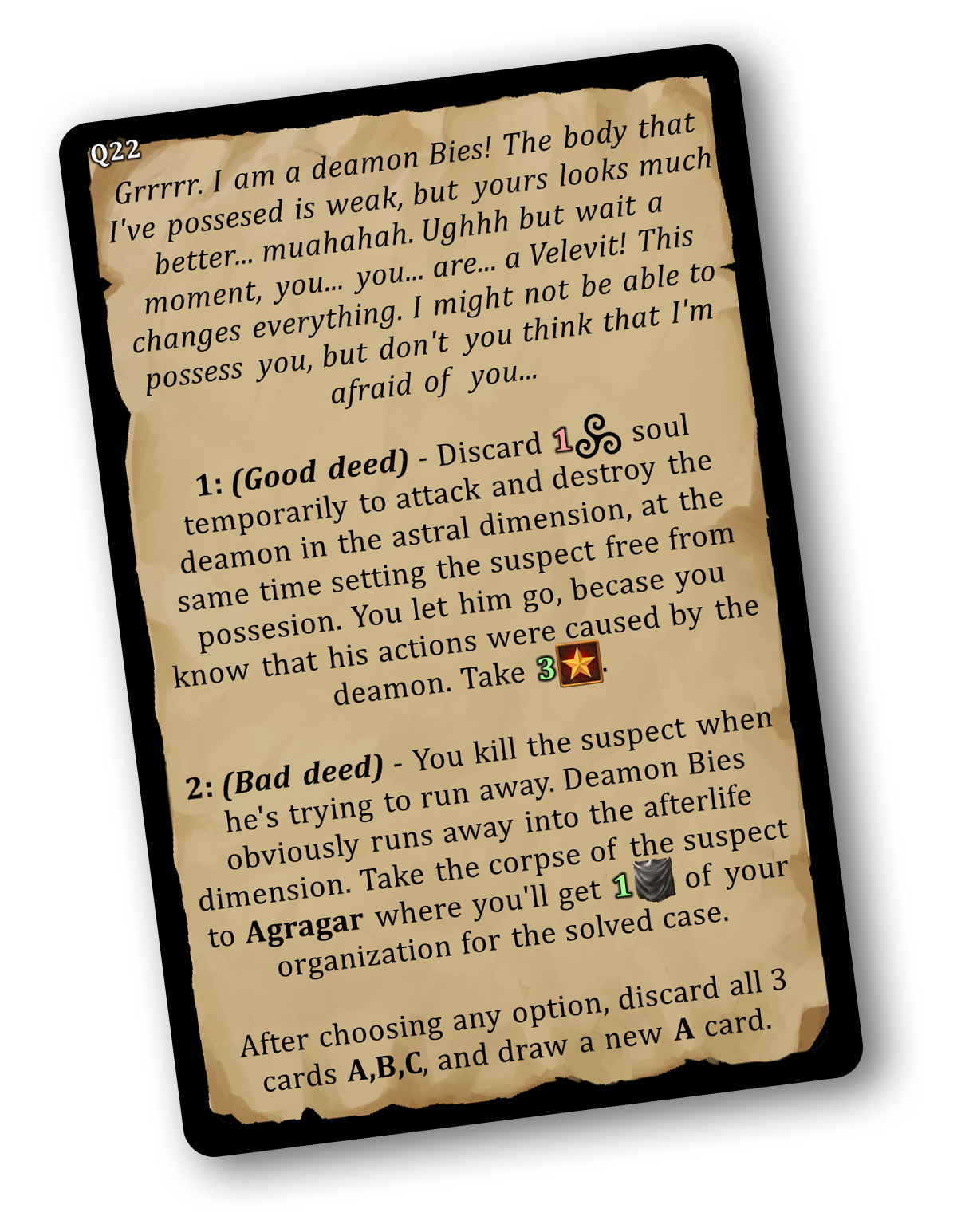 In the above example, you find out that the one guilty for the massacre (and the one who has left his own helmet at the crime scene) is actually possessed by the daemon. He’s innocent, because it was the daemon that forced him to do it. First option is a good deed, however it’s a bit controversial. Remember that you are playing one of the descendants of Volos. You are someone who people call a Velevit (many souls). You are aware of the fact that you are almost immortal. When you die, you rise up again, so you shouldn’t be afraid of death. The first option is to kill yourself, so that you can destroy the daemon in the astral dimension. The prize is lots of experience. The second choice is a bad deed – you decide to kill the guy. Obviously the daemon runs away into another dimension, but at least you punished someone, right? Remember that you may suffer determination penalty if you decide to do a bad deed while playing a good character. That can make the choice even harder. The prize for solving the case is an influence point of your faction. Those points are critically important for winning the game, as they act as multipliers to your Victory Points that you collect throughout the session. Once again, we’ll talk about factions next time.
Once you complete the ABC sequence, you start it all over again – take another card A.
Doing these quests is not mandatory. This game is about you being completely free to do what you want. For example, the last time I played, I didn’t do those quests. I decided to do something else and wait till another player finishes theirs. Then I followed the player that had chosen to get the faction influence point as a prize. When he was tired, I attacked and defeated him, but I didn’t kill him. One of the game rules allows you to spare the opponent’s life and humiliate him instead. So the opponent stands still with just 1 health point, his/her equipment and money intact, but you take over the influence point. After all a representative of one faction defeated the representative of another faction in a duel. This way I was leading by Victory Points, without even doing my ABC quest sequence.

The ABC system is designed to also help a new player discover some game mechanics (in case you’re one of those who don’t read the manual) :/
Each quest is arranged in such a way that you learn something new. For example, owing to the A card in the above example, you learn that you can repair items by visiting merchants in towns. With other ABC cards, you can also learn that you can travel with a ship, buy elixirs in the Academy of Magic, hire mercenaries in the taverns, or that you’ve had not a clue what a “2x” mark means when printed on some fields on the map… etc.

Of course, all combinations of the ABC sequences will make sense. We’re planning to have 10 cards in each stack, so a total of 30 cards. We might add more in the expansions if the game sells well enough, but for now 1000 unique combinations feels enough. On an average session, the player has enough time to complete 2-3 sequences before the game is over. On some rare occasions it may be 4 sequences, but you’ll have to be very lucky.

The ABC quests system works perfectly in the multiplayer game, also because of the amount of text to read, which feels well balanced. After all, we don’t want the players to spend most of their time reading some flavor texts, and let their friends wait till they’re done reading.
The collected faction influence tokens are not as powerful in the single-player mode as they are in the multiplayer mode (they are still useful though because each token gives a special ability). For those who love very deep and immersive stories, however, we’re considering an alternative to the ABC system in the single-player game. We’re not promising anything yet, but we’re discussing a change in the story book. We’d like to expand it, so it’s not just a flavor book, but also a list of detailed quests and stories that you follow when playing each character. You’d start playing with the first character, for example a Barbarian. When you successfully finish the quest, you can play again with the next character following his/her story. You’ll discover how each character has a story that blends with the stories of other characters. You may connect the dots and figure out things like… “aaah so the previous character I played did this and that, and that must have been the reason why this character is in such a situation.” Not always clear statements, only hints left for you for free interpretation.
So… it would be something like a regular pen & paper RPG. Again, we’re not promising anything yet. We just wanted to share our ideas with you. Ideas like this one will obviously increase the development time again, but hey… we’re doing this game with pure passion. We strive to offer you an amazing experience. And we believe that we’re getting almost there.

That’s it for today. Thanks for reading, and don’t forget to share it with your friends. Cheers! 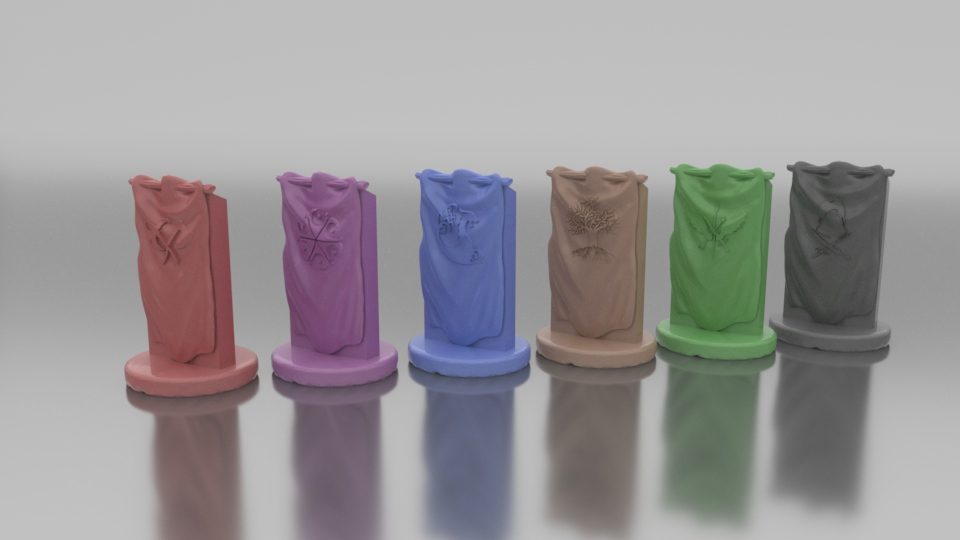