We had a longer break from the last post, but that doesn’t mean we were idle. Quite the opposite, in fact. Based on some valuable feedback we’ve decided to make one more pass of grand changes in the game, which we are super hyped to present to you. Unfortunately, many of the things we’ve shown you in the past have changed a lot, or even become obsolete. After all, this is a development diary – a live document that shows the process of the development in real time. So… let’s begin with the big ones.

The last version turned out to be a bit over complicated. All the circular slots on the right side were just to help you remember your bonuses.

We’ve realised that those slots weren’t that important and some less experienced players might actually get confused a little, so we’ve come up with something that looks less complicated, and serves a new purpose which I’ll explain in a moment:

Those bonuses are easy to recalculate before every fight, which in fact happens only from time to time. The player will, however, have to remember the rule from the rule-book regarding the limits – the sum for each bonus may never exceed 3. So if your weapon damage is 6, your talents, equipment and trinkets give you in total +4, then the max bonus is +3 anyway, so your total damage is 9. The same with damage reductions. The other circular markers responsible for tracing the colour of your dice, and bonuses from the equipment sets will be explained shortly, but they are no longer needed, either.

We’ve replaced that area with 3 slots for combat cards. The combat cards are a completely new element of the game. We’ve moved all combat-related skills from the equipment into the deck of combat cards that the player builds. 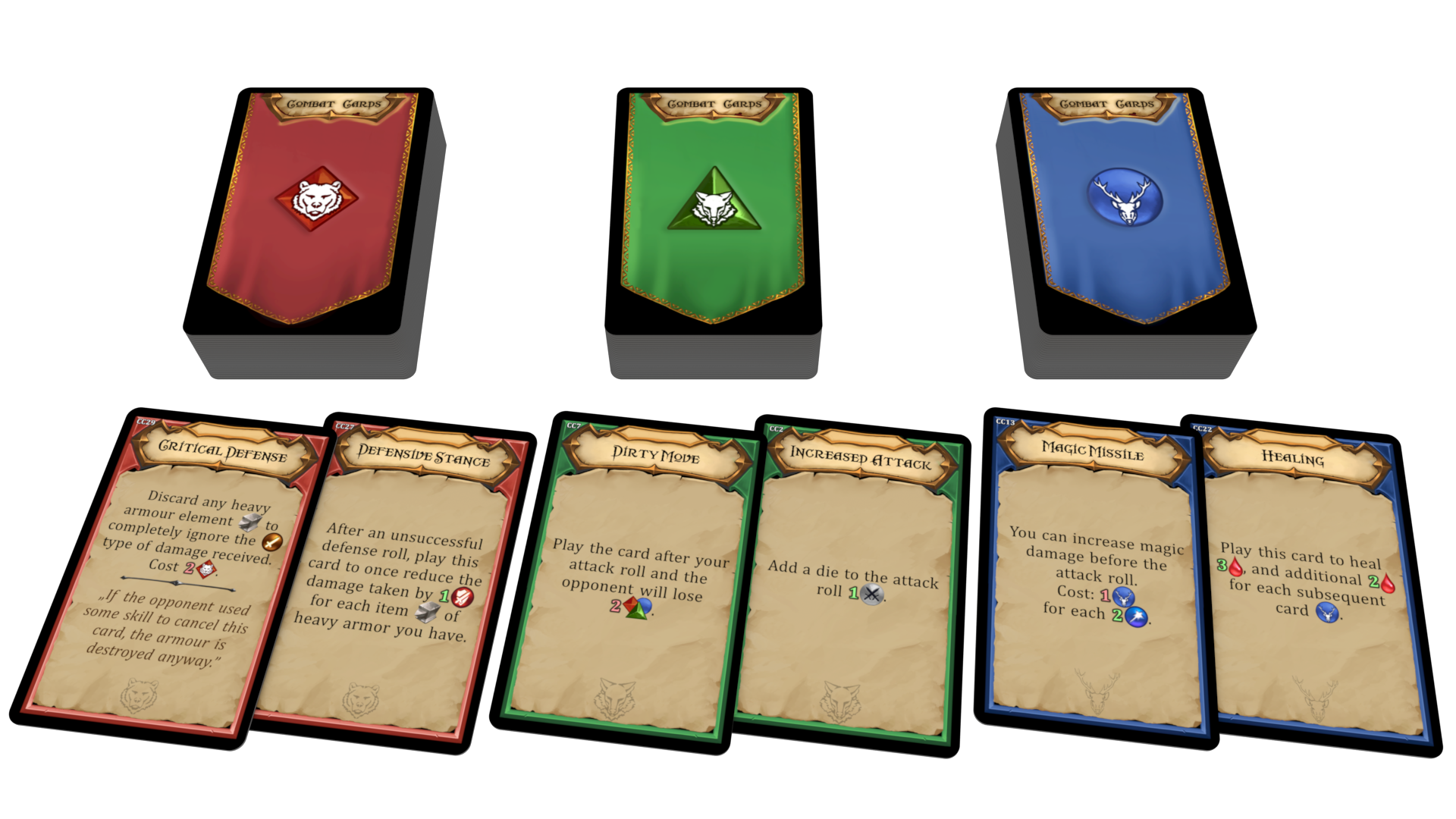 This solves plenty of issues mentioned by players. For example, the difficulty of finding everything useful during the fight. The information was sprinkled all around your panel and it’s sides. Now, you have everything you need right in your hand. The combat itself has changed completely too. And is way more interesting than before. In the present version you collect your deck of combat cards. Let’s first clarify some terminology:

The more you move on the map, the fewer combat cards in hand you’ll have in case someone attacks you.

Each deck of combat cards has some symbols that look somewhat similar to the attributes of strength, agility and intellect, but why the animals? The symbols come from Slavic mythology, where each animal symbolises a different thing. The bear is a symbol of strength, the wolf is a symbol of agility, and the deer is a symbol of wisdom. Each stack of combat cards has a totally different style of fighting. Those from the strength deck have plenty of skills that allow powerful hits, as well as plenty of damage reductions. The agility deck has plenty of cards that increase chances of hitting, and the intellect deck has plenty of magic-based actions like self-healing, time-bending, mental attacks etc.

The number of cards that the player is allowed to collect is limited. It’s defined by the equipment that you put on:

How to count the max number of combat cards

You can try to put on different types of equipment in order to change the limits of your deck. Naturally, the higher the grade of each armour piece, the higher the number of combat cards you get. So you can either go for example towards a pure wizard, or try blending it and have a half wizard half assassin instead, and experiment if it works well against the characters of other players. That’s of course only if your attribute values allow you to put on the armour of your desire.

Another major change related to the combat was done to the dice. The old dice were in different colours and in 2 different types: D12 for attack and D10 for defence. In total 7 different dice. It was super simple to understand – the colour reflected how powerful was the dice and it was a different type for either attack or defence. The problem was that in practice, a player was confused which die to cast especially when throwing attacks for his/her character and for the opponent too. “Is it my character turn? Yes, then I cast the yellow die.. no! Wait! Not D10, D12! Now it’s the opponent turn. Oh wait I’ve cast yellow D12, but I should have used green D12…”

So we’ve come up with a solution. Now we have ONLY ONE D12 die, and that’s it! No colours, no different types. 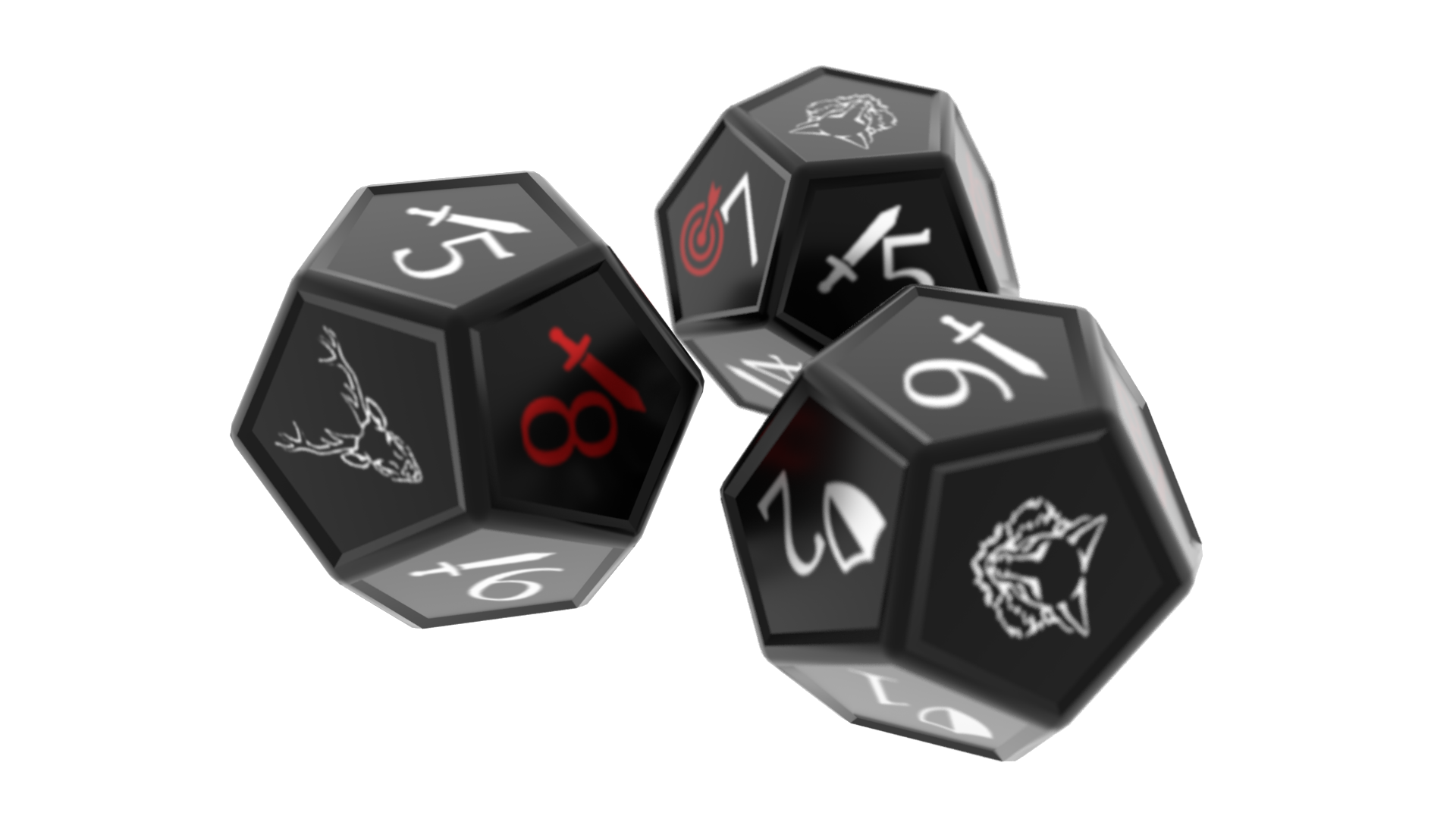 It took us a bit of research and several balance passes. We used the computers to help us calculate the chances of hit/crit/miss that match different styles of combat and are well-balanced. As you’ve noticed, there are some new symbols on the combat dice. The sword and the shield have remained the same and mean hit or defence, respectively. The other sides have symbols of the animals – the same that you can find on the combat cards. Those mean a critical hit but only for characters with dominant attribute of that symbol. The agile character (wolf) covers 2 sides, while other animals have only 1 side. So if your dominant attribute is agility and you cast the wolf symbol, it’s a critical hit for you if you attacked, or a successful defence if you defended. Now you may think – agile characters are over power, because they have higher hitting chance! Well… that’s not true, as in practice the strong characters have combat cards with skills that reduce the received damage a lot! And the combat cards from intellect have plenty of skills that allow easy healing, repeating some actions and more cool things. So in the end it all feels equal. But if that wasn’t enough, we’ve decided to increase the agile character’s chance of hitting even more! There are combat cards that allow casting more than 1 die: 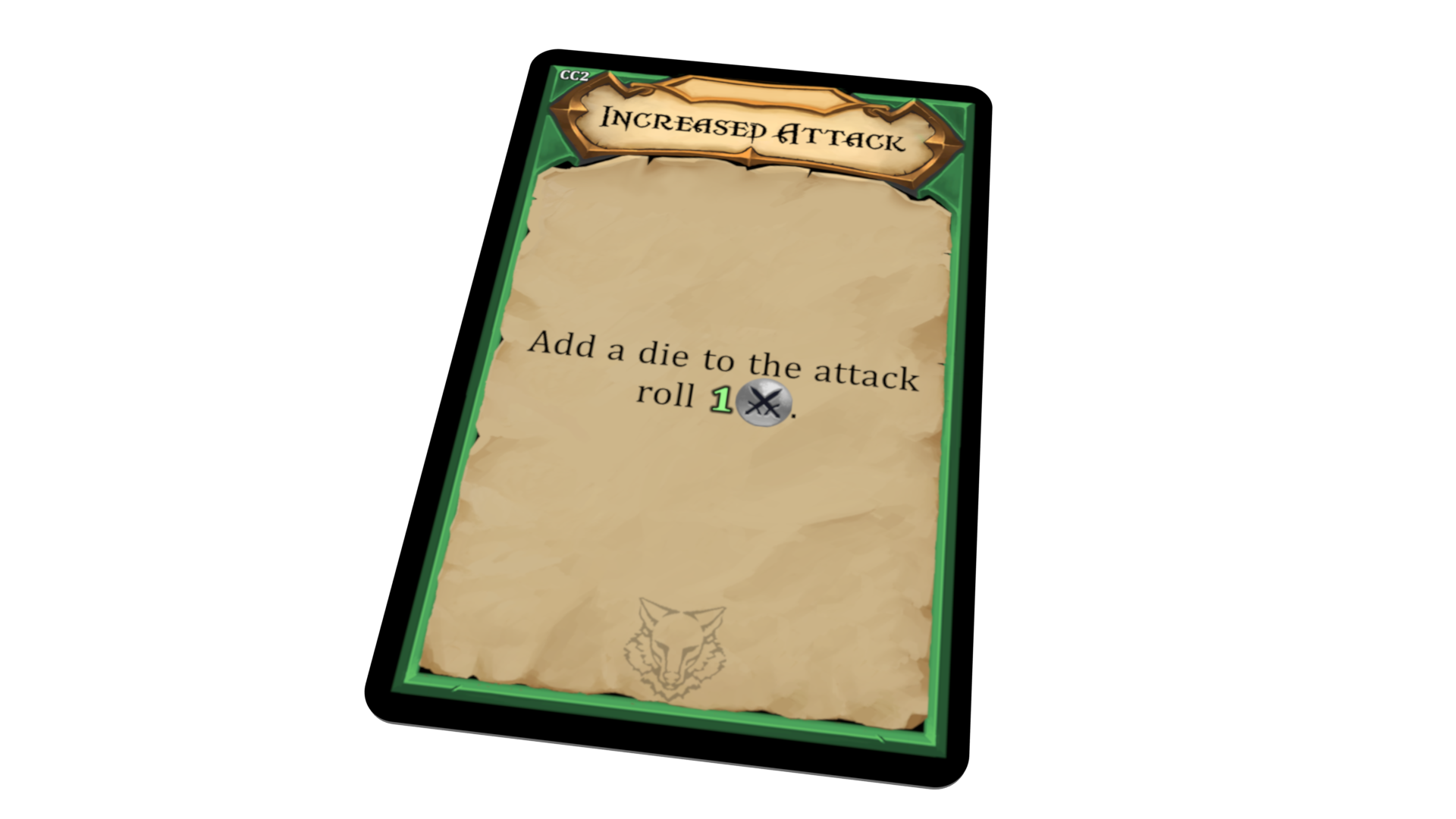 That’s because agile characters should have a higher chance for both critical hits and normal hits. The interesting fact came out in the automated tests: 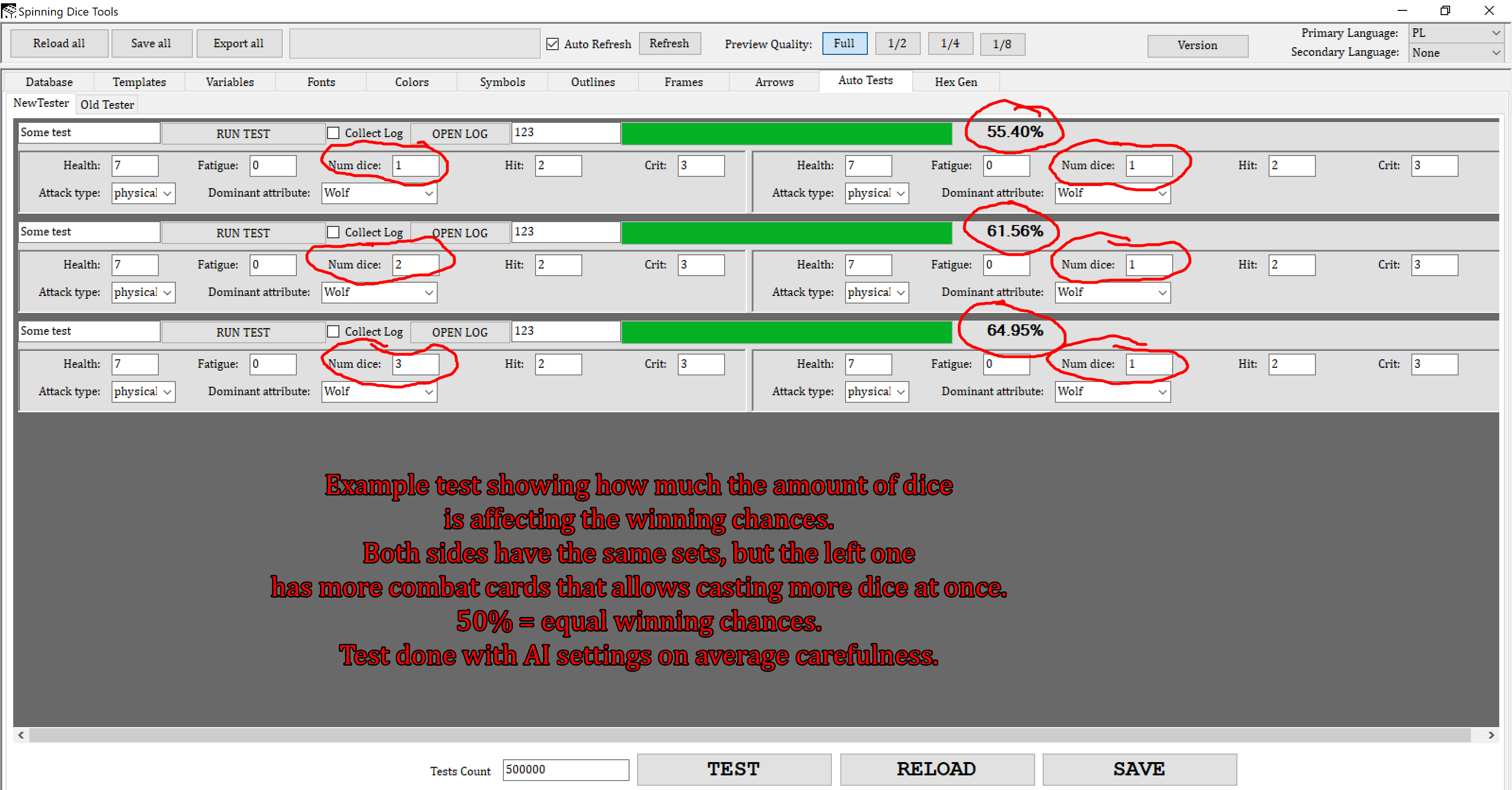 One may think that the more dice you cast the higher (even exponentially) chances you have for winning, right? Well, the tests have shown that it’s the opposite. Yes, you have higher chances of hitting, but actually lower chances of winning! Why? Because casting more dice at the same time actually costs you a combat card, and each combat card simulates the stamina. The initial AI that we wrote to simulate the combat was very careless and was always playing that card whenever it could. Which means that it run out of combat cards very quickly, and you need combat cards to be able to roll a dice to defend. So playing an agile character doesn’t really give you any advantage over the other players. Instead it’s all about how smart the player is. You need to have a good judgement – should you use a combat card as an attack skill? Or keep it to be able to defend?

Side note: you might have noticed that the 1st AI test results shows 55.4% although both characters are absolutely the same. That’s because the attacker (the left one) has ~5% higher chances of winning just because it’s first to cast the dice.

We’ve found a very satisfying initial balance with the current combat mechanics and the designed dice. At least for now, until we get more feedback from real players. After all an AI will never tell you if something is fun or not. So far, it all looks promising during the internal tests.

The magical penetration dice didn’t change, except that we’ve made a prettier design of what they’ll look like finally. We’ve changed their colours from blue, blueish and purple, to the same grades as the old combat dice: green, yellow, red. 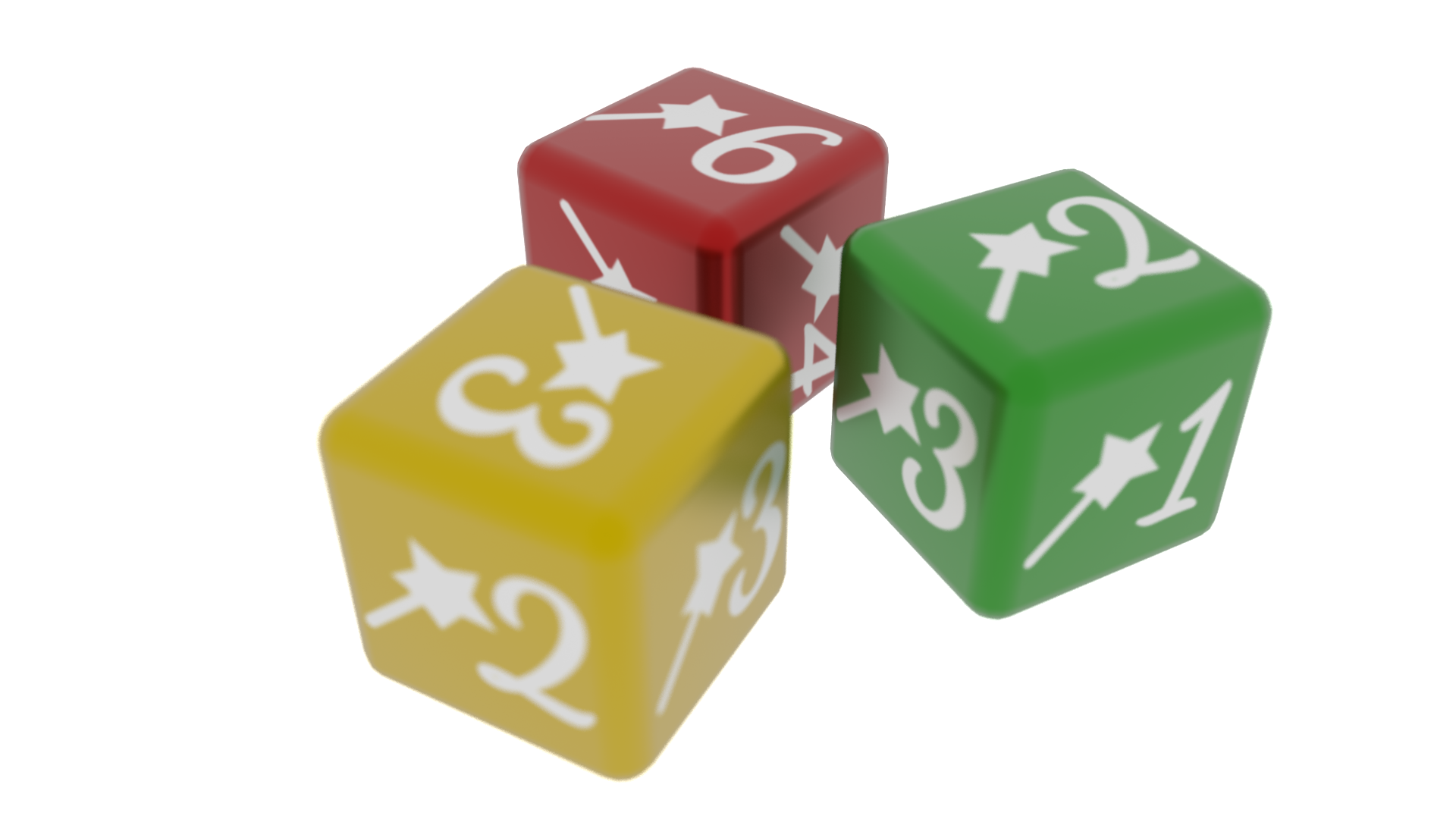 We’ve made an insane amount of changes since the last development diary, and we’ll continue describing them in the next posts. That’s it for today, and see you again very soon… 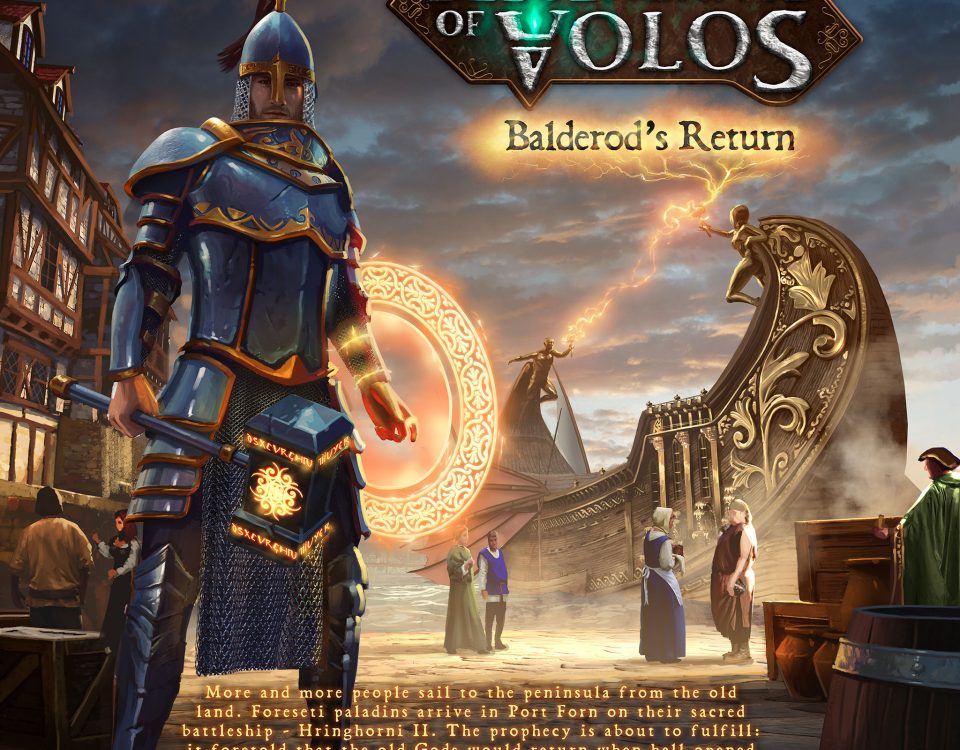 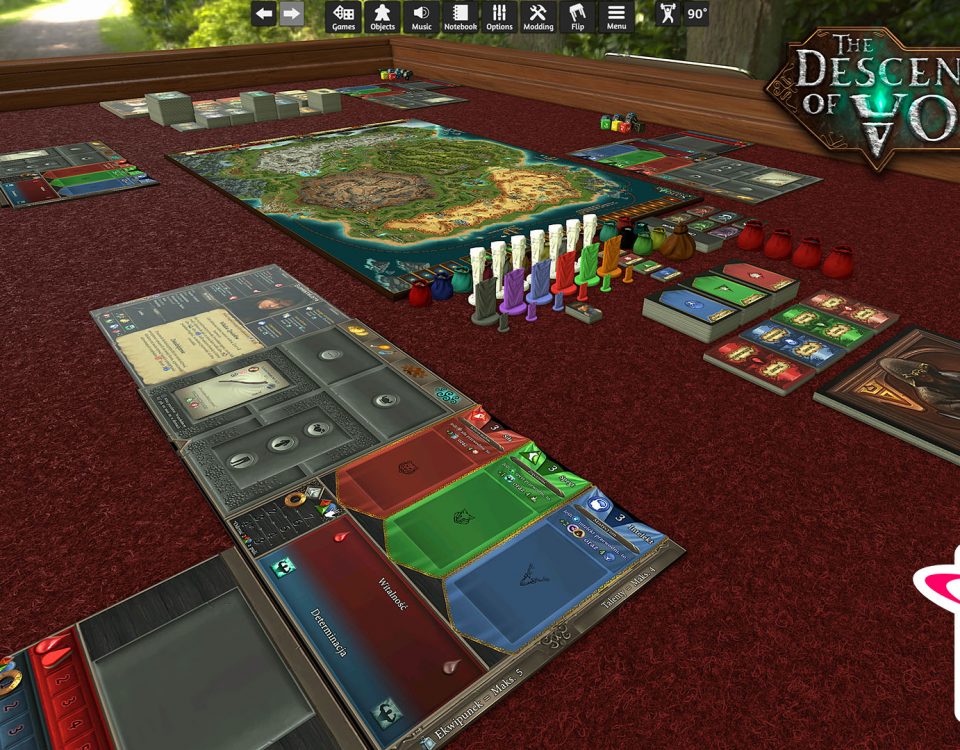 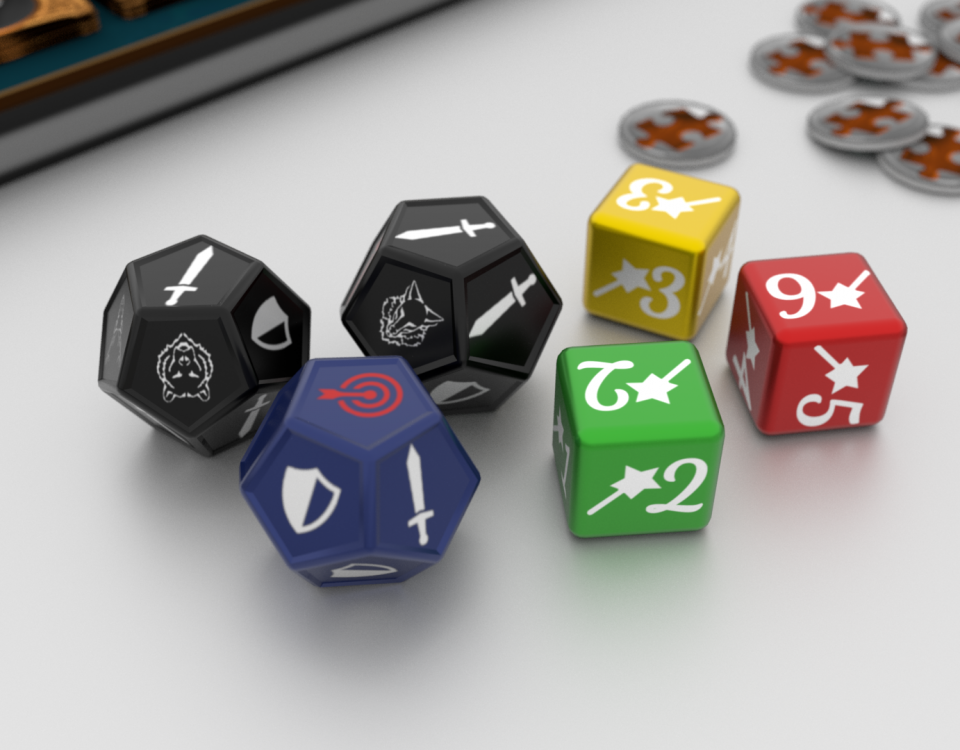